The following article was written as an exhibition preview of Jus’ Drawn by proppaNOW at the Linden Centre for Contemporary Art in Melbourne. It was published in Art Guide Australia, September/October 2010, pp.34-35. The exhibition ran from Saturday, 7 August 2010 – Sunday, 12 September 2010. 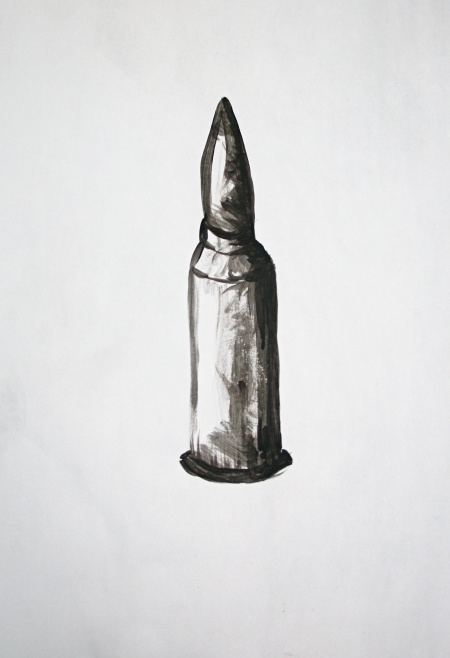 A single black bullet is drawn starkly upon a plain white ground. It doesn’t look much like Aboriginal art; there are no dots or cross-hatching, nor any esoteric reference to an arcane Dreaming. It is just a simple, solemn image. It is a drawing by Tony Albert, one of the youngest members of the Brisbane-based Indigenous collective proppaNOW, included in the group’s first Victorian exhibition, Jus’ Drawn, on display at the Linden Centre for Contemporary Art. In the extended text panel that accompanies the work we are told that it refers to the artist’s grandfather, Edward Albert, who like many men of his generation, served in the Australian army during the Second World War. The text makes little overt reference to race; it is only in its final paragraphs that we are told that Edward belonged to the Kuku-Yalanji, Yidinji and Girramay language groups. Despite his distinguished service on the battlefields of Europe, as a result of his heritage he received none of the benefits afforded to other returning servicemen. In this tragic denouement, race becomes the sombre, inescapable reality that lurks disquietly within the silent image on the gallery wall.

Jus’ Drawn is the first exhibition in which the diverse group of artists that make up proppaNOW have worked across a single medium. It offers a unique opportunity to assess the marked continuity of their artistic concerns. At the centre of these is a desire to challenge the notion that ‘authentic’ Aboriginal art comes from remote regions or is concerned with the continuity of pre-colonial traditions and forms. For Albert, this distinction between urban/contemporary and remote/traditional is facile: “All Aboriginal art is urban,” he muses. ‘None of it is produced by artists living within a purely traditional setting. It’s all contemporary art.”[1] Fellow artist Richard Bell is less diplomatic, labeling remote Indigenous art as ‘Ooga Booga Art’, and arguing that it is based upon a false notion of tradition that casts Indigenous people as the exotic other. According to Bell, ‘Ooga Booga Art’ is a product of the white, primitivist gaze – an argument summed up in his much quoted “Bell’s Theorem: Aboriginal Art – It’s a White Thing.”[2]

For the artists of proppaNOW, it is their art that represents the real, ‘authentic’ Aboriginal art – one that speaks of the everyday realities of Indigenous experience while critiquing the ways in which Indigenous identity has been shaped by colonial vision. This theme runs throughout Jus’ Drawn in works such as Bianca Beetson’s text drawings, which opine, “SORRY for not being white enough. SORRY for calling myself ‘blak’” or those of Andrea Fisher, in which brown paper bags are delicately refigured as “everyday dilly-bags.” 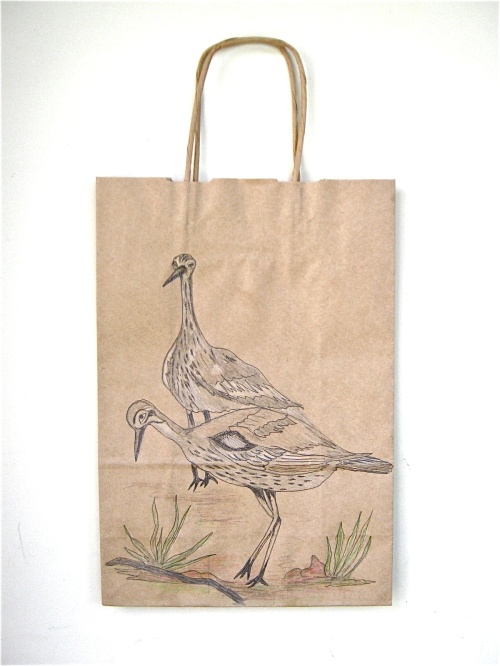 And yet, the implication of Bell’s critique goes one step further suggesting an Indigenous complicity in the creation of a subjugated identity. In Bell’s own work, identity is forged from a mad jumble of appropriated signifiers, from sources as disparate as Roy Lichtenstein and Emily Kame Kngwarreye. The implication is that identity is created at the intersection of historically shifting subject positions. This destablises any claim to an ‘authentic’ Identity position of any kind, and problematises the entire paradigm of ‘Aboriginal’ art. What is the point of being the most ‘authentic’ Aboriginal art, if the very category is inalienably ‘A White Thing’ which facilitates its own othering?  As Stephanie Radok has speculated, “surely as long as we call it Aboriginal art we are defining it ethnically and foregrounding its connection to a particular culture, separating it from other art and seeing it as a gift, a ‘present’ from another ethnography.”[3] Whichever way the dichotomy is presented – between urban and remote, traditional and contemporary, proppaNOW and Ooga Booga Art – at the core is an essentialised notion of Aboriginal identity that is clearly unsettled by artworks whose raison d’etre is to explore the endless variety of experiences that inform contemporary Indigenous existence. According to Tony Albert, “The most important thing is how you choose to be labelled.”[4] And yet, as the story of his grandfather reveals, this is a freedom that has long been denied to Indigenous people. Indeed, Albert has literally enacted this classificatory violence, defacing pop-cultural images of Indigenous people with racist labels like ‘Coon’, ‘Abo’ and ‘Halfcaste.’ If, as Bell’s work suggests, identity construction is a continuing act of negotiation, the art of proppaNOW is about taking control of this constructive process. This is, perhaps, most poetically articulated in the drawings of Vernon Ah Kee. Since 2004, Ah Kee’s art practice has been dominated by a series of large-scale portraits of his family members. The source material for his first portraits came from archival photographs of his grandparents, in exile on Palm Island in the 1930s. According to Ah Kee, the photographs were taken by the administrators of the Aboriginal penal settlement as “a scientific record of the dying species of subhumans … this exotic ‘other’ that had been set aside.”[5] In enlarging these images to an imposing scale, Ah Kee returns power to their gaze. As their faces shimmer into being amidst an urgent flurry of pencil lines, they do not evoke an elegiac longing, but rather, a profound moment of presence – the immediacy of a unique, individual identity slowly taking shape from the haze. In this coming into being, we get a glimpse of the subtle but immense shift between the old paradigm of Aboriginal art, and a new understanding of contemporary art, produced by singular Aboriginal artists.