Sidney Nolan and the Relativity of Otherness

Yikes. It is 1030pm on my 34th birthday and I haven’t even started today’s blog. I knew the daily blog was going to be a tall order, but some days really push you!

In May this year I had the great pleasure of spending a week in London. It was the first time I had been to the UK since visiting with my parents in 1989. Needless to say, I spent my time dashing between galleries and museums, taking in the embarrassment of masterpieces on display. At one point, in the Tate Modern, I rounded a corner and came face to face with a very familiar sight: a Sidney Nolan desert painting from 1950. I haven’t been in Australia for about 18 months, so seeing Nolan’s painting was a bit uncanny; its familiar colors and textures belonged somewhere else entirely. Whether out of familiarity or surprise, it caught my attention; to the extent that I can no longer remember any of the other works in the room. Nevertheless, I approached it with some trepidation, cautious that its allure was nothing more that sentimental parochialism.

Alongside the work was a brief quote from Nolan, describing his motivation for painting these composite desert scenes:

Nolan’s statement is quite extraordinary, in that it reveals both his desire to escape the “provincialism problem” (so eloquently described two decades later by Terry Smith), while finding himself essentially trapped by his own strategies: his self-othering against the “alien” desert landscape. I cannot help contrasting this to Edouard Glissant’s assertion that the colonized is always the first to recognize the contemporary state that he terms “Relation,” because they are the first to recognise the other within, having been forcefully cast into the role by the encompassing colonial power. As always, Glissant’s description is delightfully rich:

We “know” that the Other is within us and affects how we evolve as well as the bulk of our conceptions and the development of our sensibility … In spite of ourselves, a sort of “consciousness of consciousness” opens us up and turns each of us into a disconcerted actor in the Poetics of Relation.

It is easy to forget that colonization  works in degrees: and as Nolan’s case suggests, the Australian settler subject could occupy both the position of colonizer and colonized. But there is still something worth thinking through about an artist standing at the precipice of this consciousness of Relation. Several scholars have spoken to me about the profound influence of Indigenous art on Nolan, although relatively little has been published on this matter. (Likewise, the incorporation of Aboriginal shield designs in Albert Tucker’s work also demands some critical attention). On the one hand, this is clearly in line with the modernist tendency to use Indigenous art as a trove of primitivist motifs to be raided at will (something clearly evident in Nolan’s In the Cave 1957, also at the Tate). But I think Nolan’s statement hints at a more profound realisation. Nolan’s problem, as summed up in this statement, is that he is looking to replicate the other within through a generalised otherness without… something that can be reproduced as profoundly alien: the outlaw, the desert, the Aborigine and so on. This is why these paintings are ultimately provincial: they pander to the desire of the center for a provincial other than is recognizable, but different. The lesson of Relation is not to try and cast this otherness in understandable terms, but rather, to recognize that it is one part of the infinite diversity of the world. It would take several decades before the true artists of the desert would jolt the Australian art world into consciousness of this. 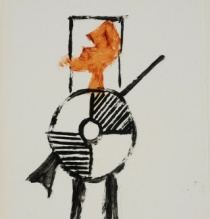